Sometimes we meet fascinating guests. When meeting Peter at his Cabin he told me about his mission for his holiday. Please enjoy his story.

In my time researching I discovered that Desborough, a widower, and his 5 children arrived aboard the sailing ship ASIA and I was fortunate to find out that the ship’s doctor, Dr George Mayo had kept a diary of his voyage. While much of the diary’s content was mundane, there were two events recorded that nearly resulted in disaster for the ASIA. The first of which occured on 1st April 1839 (no joke) what turned out to be a smaller and faster pirate ship of the Cape de Verde islands that attempted to board the ASIA, however they were fooled into believing it was a convict ship with 200 convict men aboard and therefore not much of any value to them. Still they fired their cannon at the ASIA and very nearly hit the man at the helm before departing and admitting that they were pirates.

The second near disaster occurred as the ASIA approached Investigator Straight and was very nearly dashed upon Cape Borda’s rocks due to our captain (Benjamin Freeman) who was too drunk to see that he had steered the ship towards the rocks. Dr George Mayo recorded the debacle in his diary, as did Henry Hussey who was a boy aboard the ASIA, and who had recorded the event in his later years in a book of memoirs titled ‘Colonial Life and Christian Experience’ (1897).

Now the true hero of the story because of his outstanding leadership in the times of peril, was John Finlay Duff who was himself a ship’s captain and on his way out to join the new colony of South Australian pioneers along with his wife and daughter.

Captain Freeman on both occasions was under the weather having had too much grog and it was Captain Duff who stepped forward and took command of the ship.

Captain Duff was instrumental in the founding of South Australia and in July 1835 he captained the ‘Africaine’ which had been chartered by Robert Gouger and John Brown with around 60 emigrants. It had a considerable cargo bound for South Australia on what has been dubbed the “First Fleet of South Australia”. It had an uneventful voyage and on 1 November 1836 was off the coast of Kangaroo Island, near Cape Borda.

My wish was to someday visit KI and explore the place off Cape Borda that very nearly ended in tragedy for my family and many others who dared to dream of a bright new beginning in what was dubbed at the time, “land of Promise” and it must have been like coming to another world altogether. Such a contrast.

Thinking about it today while sitting in my very comfortable Emu Bay Holiday Home cabin, it made me realise just how much luck has had to do with our current reality. Our ancestors give us more than just their names and their DNA. Their dreams and aspirations have shaped our past, present and future for us, their descendants.

I have fulfilled my pilgrimage (of sorts) and captured pictures of Cape Borda’s rocky shore, showing the serious peril that the old ship ASIA faced, if not for the command of captain Duff. 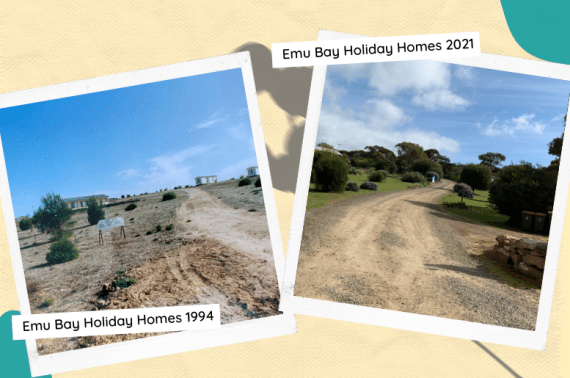 Two friends and I spent 3 lovely nights in a cabin at Emu Bay Holiday Homes over the final weekend of October. The cabin was very clean and well maintained. Rene warmly welcomed us on arrival and provided us with some great local tips. The cabin was well equipped and had everything we needed for a home away from home experience. Spectacular views of Emu Bay and convenient location. We return home to Adelaide refreshed and with many lovely memories. A big thank you to Rene and Johannes. We now keenly await our next memorable KI experience.

We had a fantastic five night stay with four other friends in Jireh House. Spotlessly clean and well appointed it was a great location to enjoy the views set among beautiful gardens with numerous colourful flowering plants. Mornings and evenings on the front verandah were memorable in the tranquil setting with numerous birds using the bird bath or feeding on the flowers. Easy access to Island attractions. Great assistance and communication with all our arrangements from Christine and Rene. We’ll definitely recommend it to friends and return some time.

A house with stunning views. Home away from home comfort. Great facilities provided. A fantastic location . House situated amongst beautiful gardens so tranquil and peaceful.
Beautiful grounds for taking a walk and enjoying the Australian flora and fauna. Spotting koalas in the trees near the house was a highlight.

Close
You are currently viewing availability of all our homes for the dates chosen, scroll down to see the availability for the home/s you are interested in.
Book your ferry journey